At NHTI, our dedicated athletic teams compete for New England and national championships in eight sports as members of the Yankee Small College Conference and the U.S. College Athletic Association. Our student athletes are consistently named All-Americans, Academic All-Americans, and YSCC League All-Stars for their outstanding athletic and academic accomplishments.

Enjoy a day of golf and help support your NHTI Lynx in the process. Join the NHTI Lynx Athletics department for our 8th Annual NHTI Lynx Golf Series Golf Tournaments in 2023.

This four-day high school basketball tournament fundraiser will benefit the NHTI Athletics program. It will take place in the Goldie Crocker Wellness Center Gymnasium on the NHTI campus.

NOTE: There will be an entry fee, which will be determined closer to the event date.
Capital Area Middle School Cross Country Invitational

This event is a fundraiser to benefit NHTI’s Men and Women’s Cross Country teams.

The NHTI Athletics Hall of Fame was founded to honor those individuals who have shown leadership, sportsmanship, commitment, and achievement during their time at NHTI as an athlete, coach, or supporter of our teams and our rich athletic tradition.

To nominate someone for the NHTI Athletics Hall of Fame, click here

This event is a fundraiser to benefit the NHTI Men’s Soccer team.

This event is a fundraiser to benefit the NHTI Women’s Soccer team.

This event is a fundraiser to benefit the NHTI Women’s Volleyball team.

This event is a fundraiser to benefit the NHTI Women’s Volleyball team.

The NHTI Delta Dental 5K will be on Friday, April 15, at 6 p.m. at NHTI. The NHTI/Northeast Delta Dental 5K Road Race is part of the Capital Area Race Series. The proceeds from this race benefit the NHTI Jennifer Kemp Memorial Scholarship.

This scholarship is named in memory of Jen Kemp, a graduate of the Sports Management program who worked in the NHTI Athletics/Wellness Center Office. She passed away unexpectedly in 2004. The scholarships are awarded twice a year (spring and fall semesters) to qualified students who demonstrate strong academic skills and leadership potential, while also being active in campus life and community service at NHTI.

This basketball tournament is a fundraiser to benefit the NHTI Men’s and Women’s basketball teams. It takesplace in the Goldie Crocker Wellness Center Gymnasium on the NHTI campus.

NOTE: There will be an entry fee, which will be determined closer to the event date.
NHTI Men's Basketball Edward Jones Tap-Off Classic

This tournament is a fundraising event to benefit the NHTI Men’s Basketball team.

NOTE: There will be an entry fee, which will be determined closer to the event date.
NHTI Men's Basketball Tap Off Festival

This tournament is a fundraiser to benefit the NHTI Men’s Basketball team.

NOTE: There will be an entry fee, which will be determined closer to the event date.
YSCC Men and Women's Soccer Final 4 Championship Hogan is a Plymouth State graduate (1979 B.S./1988 MED) and a lifelong N.H. native. Dedicated to teaching and coaching his entire professional career, he’s recognized as one of the premier instructors of the game of basketball in New England.

NHTI men’s basketball has enjoyed unprecedented success under Hogan by capturing two USCAA national championships (2020, 2005) and one runner-up in 2002. NHTI has captured YSCC Tournament titles, regular season titles, three YSCC championships, and five NNESCC championships. 90+ NHTI players have gone on to play at four-year institutions, often contributing greatly to the team’s success on and off the court.

For the past 40+ years, Hogan has been directing camps and clinics in N.H. to improve attendees’ basketball skills, develop their positive self-esteem, and help them learn the how to be a successful member of a team.

At Plymouth State, Hogan compiled the highest winning percentage of any men’s basketball coach in the school’s history. His unique coaching style and dedication to the fundamentals guided the Plymouth State Panthers to postseason play in the prestigious NCAA Tournament and numerous ECAC berths.

Hogan is serves as the director of Athletics, professor of Sports Management and head men’s basketball coach at NHTI. He was recognized as the USCAA National Coach of the Year (2002, 2018), has been inducted into the Plymouth State and NHTI Hall of Fame, and has earned the James Desmarais award for contributions to athletics in N.H. 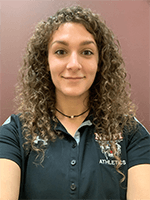 A lifelong resident of N.H., Giordano attended Pelham High School as a dedicated four-year member of its field hockey team. She went on to Plymouth State University, earning a Bachelors in 2018 and PSU’s Non-Traditional Graduating Student Award. Giordano stayed at Plymouth State and completed her Master’s in Athletic Training in 2020. Krenzien has been an administrative professional for 20+ years. She has been the office manager for the Athletics and Wellness Department since 2012. She is also an adjunct professor in the NHTI Natural Sciences Department, teaches Medical Terminology in the Early Start program, and has been the advisor of the NHTI Alliance club since 2015. Susan has a multitude of higher education degrees, including an MS in Organizational Leadership and a human resource certificate from SNHU. She is a lifelong member of the Phi Theta Kappa Honor Society and has been a N.H. Notary Public since 2000.